END_OF_DOCUMENT_TOKEN_TO_BE_REPLACED

A few weeks ago we went on a quest in the abandoned Losheng Sanatorium. This is an almost completely deserted site where leprosy patients had to live in isolation during the early 1900s. The hospital was built on a mountain so the inhabitants were completely separated from society.

Besides some patients who don’t want to leave their home, the community and the life they are living there, the area is almost completely abandoned.

First of all, a bit of history about the Losheng Sanatorium.

In 1927 the Japanese built a self-sufficient village that was named Losheng Sanatorium. Losheng means ‘Happy Life’. They chose to built the site on a mountain including important facilities so the leprosy patients never had to leave the ‘village’. They built everything as progressive as possible because the patients had to live there in complete isolation of their family and friends. (Think about that ‘Happy life’) You can find there for example a hospital and a temple. Also, a lot of houses have their own vegetable garden of mini-farm. Until the mid 1950s leprosy patients in Taiwan had to live in complete isolation. Luckily, the medical treatments made a lot of progress and people were allowed to rejoin life in the regular society. Patients were allowed to go back to their family and friends and move to the city that was only +-200 meters away from them.

A lot of patients didn’t want to leave the community because they had to carry the ‘Leprosy stamp’ and they had to deal with all the prejudices connected to the illness. So it came that a lot of inhabitants decided to stay in the sanatorium and live together with the people they knew and didn’t judge them. Everything remained quiet until the early 90’s. The Taiwanese government then decided that the nearby MRT-station, Huilong, had to be expanded. To do this, the old hospital and the houses had to be destroyed. Some of the patients moved to the nearby, new, hospital that was only about 100 meters away. Other inhabitants refused to go and they got a lot of support of all kinds of action groups. Meanwhile the government decided to change the plans, in stead of demolishing all buildings they agreed to ‘renovate’ approx 10 of them, 39 would remain untouched and around 6 buildings would be demolished to expand the MRT station.

Our visit started via another article on a blog. There they described the entryway to the site. ‘Walk from the MRT-stop to the new hospital. Cross the parking and walk past the white church to the pedestrian bridge. You reached your destination.’ Easy! Haha, we made like three mistakes but in the end we managed to get to the sanatorium. We started our adventure with an elevated heart rate. We read somewhere else there was a guard checking on this area. “If something happens to us, he’ll find and help us!” we said to ourselves. The first thing we saw were some tiny houses in a pretty good condition. They seemed to be maintained or maybe even inhabited? (Sidenote: our research wasn’t that good before we visited the sanatorium 🤷🏼‍♀️) Some doors were clearly locked and the gardens were well maintained. It was not possible the guard did al this on his own, or was it?
We walked along the small streets and all of a sudden we met our new obstacle: a stray dog. Nope, nope, nooope! We immediately turned 180°, made a small detour and luckily, he didn’t notice us. Up to there, everything went well.

There were also a lot of abandoned places, as we thought, at the site. We looked at some photos before we left and it seemed a bit like a ghost town. I definitely don’t want to walk around there when it’s dark! Everything there has been ditched at a certain moment and it is still there in the exact same way. Some houses were pretty neat, wheras others were a complete mess. In some rooms it seemed like everything that was once inside a closet had been thrown on the floor.
In the mean time the security guard passed on his scooter and stopped next to us. We showed him our camera and asked ‘Okay?’ He smiled, nodded and answered ‘Okay!’ Yeah, now he knew we were there, we were a bit more at ease.

I already mentioned that our research wasn’t that good before our visit. We dit read or hear that there were still inhabitants living there, but to be honest, I thought they would be living in the new hospital nearby.

We were walking along the small roads looking for pretty spots to take pictures until, all of a sudden, the dogs were back. Yes, indeed. DogS. There were now two of them. “As long as they don’t see us, they won’t come. Don’t make eye-contact, it will be allright.” was wat we were saying to one another until all of a sudden, two electric wheelchairs zoomed by. (Wait? They are stil in use by inhabitants?!)

A cheerful man waved at us ‘Nǐ hǎo!’. 🙋🏻‍♂️ The dogs must have been thinking it was an interesting get together, so they came closer to see what was going on. The man saw our doubts about the tail-waggers and he immediately reassured us (via sign language) about the dogs. They wouldn’t do any harm, they just came closer to check on everyone, but that’s all. Ouh, what a relief! On a small courtyard we heard some happy tunes and we were invited to drink some tea with one of the inhabitants. They seemed pretty happy with their two blonde guests, but we politely thanked them for their friendly offer. It would have been a difficult one. We don’t speak Chinese, they don’t speak English. Not really a match made in heaven 🤦🏼‍♀️ Next time, we should do some more research. So we learned that there were still leprosy patients who lived there. But, what about leprosy itself?

We knew leprosy from school where we learned about Father Damien and his work on the island of Molokai. I never expected to get in touch with people who suffer from the disease, let alone exploring their community in Taiwan.

Our main goal was to find the old hospital itself. We didn’t have an up-to-date map of the village, but it wasn’t that big. It is possible to find it by just following the streets. A few times we saw a bigger building and we thought “Yes, that’s it'”,  but everytime, it appeared to be something else. 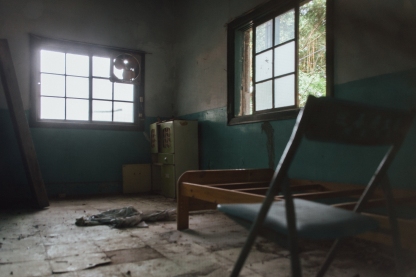 All of a sudden, we saw a big building with a waterdispenser and we also noticed there were lights shining in some rooms. It appeared to be the small hospital on the site where they take care of the patients from the village. Thanks to this hospital they get their medication and wound care in their community itself so they don’t have to leave the place. The nurse did speak a little bit of English and she explained that she was in charge of their treatment that day. We also asked her if she knew how we could reach the old hospital and she showed us the way.

Something we read on other blogs was that the guard is always telling you not to enter the old hospital. Apparently that’s what he’s been saying for years now, but most of the people still get to explore the building and take their pictures. At the exact moment of us finding the hospital, the guard drove by. Timing couldn’t be any worse, so we decided not to enter straight away. We didn’t want to get in any trouble, though.

When I finally did my reseach (yes, after we visited the sanatorium 🤦🏼‍♀️) I found out that the guard even smiles or waves when you exit the old hospital and he sees you. Well, we didn’t know that when we were there and we didn’t need any difficulties. I found out that there are leaflets, flyers and pamphlets in the building from the protestors against the MRT-station. This is apparently one of the reasons why they don’t want you to enter it.

So, we saved up our visit to the old hospital for our next visit. It is known as the star attraction for photographers, so we’re looking forward to explore it. What to expect: a surgeryroom, a library, a mortuary, an X-Ray Room, hospitalrooms, and a whole lot more. The special thing here is, that they left everything behind. The instruments, furniture, paperwork, X-rayphotos … A few years ago, there were still some organs in jars full of formaldehyde.

We defenitely want to go on a second adventure, but therefore we are going to wait until the temperatures drop. Our first trip was on a day with temperatures above and around 39°C. I would reccomend to wear long pants and long sleeves as there are a lot of mosquitos. (Sidenote: we didn’t wear those on our first trip, it’s not hard to guess what the results were… 🤦🏼‍♀️)

As almost everything is abandoned, it’s quite an exciting trip! Even more when you think about the little (and bigger!) bugs. We now know that the dogs won’t do any harm, but the spiders remain unpredictable. They are superfast. And big 😫 The dense vegetation makes it sometimes hard to see what’s going on. Unless you’re wearing shoes that cover your toes I would recommend to stay on the ‘paths’. One thing I would like to add it something about the atmosphere. On the one hand, everything is kind of scare, spooky and even frightening in some ways. But on the other hand, there’s the happy, cheerfull vibe thanks to the inhabitants. They seem quite happy living there, their gardens are well-maintained and they are living their life with the treatments they need. You can hear the happy tunes coming from a tiny radio, their clothes are drying on the line and they are drinking tea together. It was one of the first places where I experienced such duality.

I would love to start a conversation with the inhabitants and listen to their stories, but that’s almost impossible. In order to do that, you do need a translator to join you. Maybe we’ll get to know somebody before we go back during winter!